“A Portrait of the Artist as a Young Man”: The Ultimate Bildungsroman 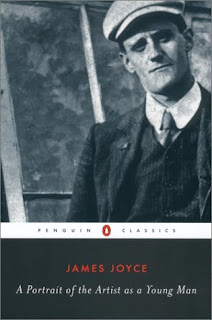 The Bildungsroman, or coming of age novel, has been done into the ground. As universal as breathing air, or eating food to stay alive, the concept of “coming of age” is something each of us can relate to, and so the Bildungsroman has become a well-worn and well-trodden novelistic form, almost to the point of cliché.

If there is one writer whose work can definitely not be described as clichéd, it is James Joyce. Joyce’s modernist masterpiece, "A Portrait of the Artist as a Young Man", is my nomination for the title of “Ultimate Bildungsroman”.

While anticipation continues to grow over Sunday’s Sports Personality of the Year Award, I’m holding my own little ceremony in my head. Not populated by Olympians and sporting greats – well, not many – the nominations list for Ultimate Bildungsroman features some of the literary titans of the past 250 years.

You probably have your own ideas about what deserves to go on this list: "Catcher in the Rye"? Definitely. "Tom Jones"? No list would be complete without it. "William Meister’s Apprentice" by Goethe? Possibly, I’ve never read it. But, as this blog is run entirely undemocratically, it is "A Portrait of the Artist as a Young Man" that takes the prize.

Originally sketched out in 1905 as "Stephen Hero", "A Portrait of the Artist as a Young Man" finally saw light of day when it was serialised in The Egoist in 1914 before its release as a complete novel two years later.

It is "A Portrait…"’s famous first sentence that frames the novel’s Bildungsroman credentials;
“Once upon a time and a very good time it was there was a moocow coming down along the road…”, writes Joyce, dropping the reader directly into an infantile world of onomatopoeic lexicon and minimal punctuation. We then learn that this is a story told to young Stephen Dedalus – the novel’s protagonist – by his father Simon, a figure seen only through glass and described as having “a hairy face”.

The opening is the author's perfect evocation of childhood, something that Stephen Dedalus almost immediately begins to drift away from. Within a few pages, Stephen is attending boarding school at Clongowes, and by page 100 we are told that Stephen’s memories of childhood are already fading from his mind. This is Joyce’s comment on the unreliable fluidity of human existence and a rejection of the snapshot realism favoured by authors from the previous century.

Compare this startlingly childlike opening with the discussions of philosophic truth found later in the book and you begin see the vastly expansive scale of Joyce’s take on the Bildungsroman.  Or – more appropriately – his take on the Künstlerroman, a novel charting the intellectual development of an artist.

It is this enormity of scale that elevates "A Portrait of the Artist as a Young Man" beyond the standard constraints of the Bildungsroman, into a plane far removed from the thematic concerns generally associated with the form. Weighty matters such as spirituality and nationalism are all dealt with on young Stephen’s journey into adulthood; two concerns which form key parts of any true intellectual development.

One passage in particular draws parallels with Salinger’s "Catcher in the Rye", written several decades later and often held up as an archetype of the Bildungsroman form. This is the passage dealing with Stephen’s first encounter with a prostitute, during which he is unable to kiss her and expresses his desire to be “held firmly in her arms”. While Stephen does eventually give in to the “swoon of sin” – unlike Holden Caulfield – it is this tender naivety of youth that sets the reader up for an acceleration in Stephen’s slide towards adulthood.

Having tasted sin and therefore forsaken eternal life in heaven, Stephen finds that “no part of his body and soul had been maimed but a dark peace had been established between them”. This is the crux of Stephen’s development towards academic, philosopher and artist, wrestling with the constraints placed upon him by the rigididity of Christianity and nationhood.

I could continue, picking out passage after passage from Joyce’s work and analysing it in detail, but I think I’ve put my case forward plainly. Whoever claims that coveted SPOTY crown on Sunday night, "A Portrait of the Artist as a Young Man"’s place as the pinnacle of the Bildungsroman genre is assured, for the time being at least.