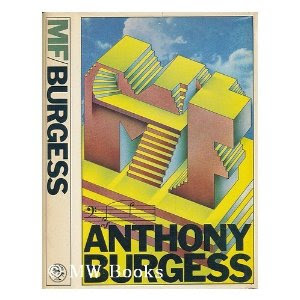 When I was a child I read, a lot. Nothing in particular, just whatever I could get my hands on. Then, I became a teenager, discovered drinking and other such evils, and gradually I stopped reading.
It wasn’t a conscious decision, it was just that one day I discovered that I didn’t have the time to do all the things I wanted to do in that day, and so it was reading that was cut from the schedule.
When I was 18 and getting ready to go to University, I found a book in Eastwood Library, Nottinghamshire that brought reading well and truly back into my consciousness. That book was "M/F" by Anthony Burgess.
Those who are unaware of "M/F" will surely be aware of Anthony Burgess’ more famous work “A Clockwork Orange”. “M/F” is an altogether weirder proposition and, while it lacks the full-blooded violence and darkness of Burgess’ earlier work, its bizarrely Oedipal, carnivalesque characters and situations come together to form a truly nightmarish atmosphere wholly unto itself.
The protagonist, Miles Faber – himself a sort of Caulfield-esque college dropout – finds himself on a nightmarish pilgrimage across the Caribbean in pursuit of the poet Sib Leguru, his intellectual idol and muse. On his travels he meets a bizarre lion-headed man, a bird woman, and his freaklike estranged twin Llew – events which are played out in front of the backdrop of a noisy, frightening and chaotic West Indian carnival.
Freudian in almost every sense, the book draws upon evocations of the ego and the id, as well as the power of childish nightmares and even the more incestuous aspects of Dr Sigmund’s philosophies. But while freakish and labyrinthine are two words often used to describe this book, it remains the book that caused me to fall back into love with literature, and for that I am eternally grateful.
Of course it “lead me onto harder stuff”, but had this not have occurred, god knows what I would have been doing right now instead.
What were the “gate way books” that got you back into reading after a long period of literal-inactivity? Let me know…