Gallacher Might Not Be a Fan of Literature, but Nick Cave Knows a Thing or Two About It 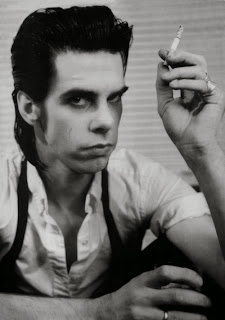 Last week I wrote a post on this blog about Noel Gallacher’s recent comments to Danny Wallace in GQ magazine. Over the course of the interview, Gallacher branded literature a “fucking waste of time”, before claiming that people who write and review fiction only do so to look down on others.

It was an odd rant, I’ll be honest. At times Noel Gallacher has shown himself to be a truly excellent lyricist, and for a proponent of one artform to pour scorn on those who practice another for no apparent reason seems baffling to me, not to mention a little mean.

But don’t worry, not all musicians have been so scathing about literature, some have embraced it as their own. Some have even done it well! Introducing, Nick Cave.

Born in Victoria, Australia in 1957, Nick Cave has become one of the most unanimously revered musicians on the global ‘alternative’ scene. His onstage persona as a wide-eyed, finger-jabbing deranged preacher of the Southern Gothic gospel have earned him as much affectionate parody as respect, but his undeniable sonic artistry has been enough to land him critical acclaim in spades, as well as legions of fans, and, I dare say, a fair amount of cash.

Anyone familiar with the dark poetry, the biblical obsessions and the murderous wit of Nick Cave’s lyrics will be aware that his lyrical fiction is already not too far removed from literary fiction. Disturbing vignettes are woven together with the intricate, detailed eye of a novelist, while the rich and complex characters he conjures are placed in environments to match.

Take Lottie, the sweet, green-eyed, 14-year-old narrator of “The Curse of Millhaven”, taken from Cave’s acclaimed 1996 record “Murder Ballads”. Lottie tells us about the series of horrific tragedies that have befallen her hometown of Millhaven, until the narrative tone suddenly becomes confessional.

Then the dark side of little Lottie’s character quickly makes itself known. “My eyes ain’t green and my hair ain’t yeller,” she tells us. “It’s more like the other way around.[...] The last thing that [Mrs Colgate] said before the cops pronounced her dead was 'my killer is Loretta and she lives across the street'".

It’s this kind of smart characterization and cunning way with a narratorial arc – evident throughout his extensive catalogue of work – that makes Cave’s music so rewarding to listeners.

It will, therefore, be of no surprise that Cave is an accomplished novelist. Published in 1989, Nick Cave’s first foray into the world of novel-writing was the sprawling southern epic “And the Ass Saw the Angel”, in which ideas raised by Cave’s lyrics were explored in more depth.

Writing like a sort of nightmarish Faulkner, Cave leads his reader through his own version of the great man’s Yoknapawtha County: an encapsulated microcosm of the American South upon which the author is able to unfold his tragedy. The novel reads like an extended play of Bad Seeds’ song "The Carny", a dark tale of a travelling circus stalked by death and disaster, which draws as much from Tod Browning’s "Freaks" as from Edgar Allen Poe’s Southern Gothic.

True to Cave’s esoteric song-writing style, he plays fast and loose with language in his prose too. In an effort to create a total – “perfect”, in his own words – isolation for central character Euchrod, Cave set about constructing his own vernacular for his protagonist, as explained in an interview with Bomb Magazine’s Lindzee Smith;

“I wanted to create an alien language. That was one of the reasons I made Euchrod a mute. He didn’t use language to communicate. Language was an abstract thing to him. Although he would not know these words, I wanted his way of speaking to be… difficult for the reader to understand.”

The result is a fascinating study of a man adrift in a frighteningly violent world, a study of the darkest machinations of the human psyche, and the roll that religious and societal constructs play in these machinations. At times, “And the Ass Saw the Angel” makes for tough reading, such is the density and luridity of its prose and subject matter, but the rich, visceral world that Cave builds for his marginalized characters makes the book a must-read for those who like their literary kicks that little bit darker.